The greatest tragedy of burying Texas History is that it denies young people and students the right to learn about genuine, homegrown Texas heroes. The Sherman Riot of 1930 produced a lot of them.

William J. Durham was a black businessman and attorney, who watched his law practice burn down on May 9, 1930 after farmworker George Hughes was lynched. After killing Hughes, the mob torched Sherman’s entire Black Business District on Mulberry Street. This black business district was one of the most prosperous in North Texas and was burned entirely to the ground. That evening, local black residents received death threats if they did not leave Sherman immediately. Many residents fled to Oak Cliff, Southeast Dallas and to other areas unknown. 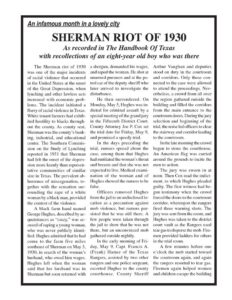 But Mr. Durham remained behind. He was not able to leave, he said, because he represented families who had wills, trusts, estates and various sorts of other legal matters in play. Plus all the county records were still smoldering in the courthouse ruins. All that had to be sorted out too.

Shortly after the riot-lynching, a young NAACP attorney from Dallas came calling on Mr. Durham. It was Thurgood Marshall, who would one day become an Associate Justice of the Supreme Court of the United States from 1967 to 1991.

Marshall drove to Sherman to try and recruit Durham, to help him write up legal briefs to sue the University of Texas, who had banned black students from its law school. The case was called Sweatt v. Painter, and they won it in the U.S. Supreme Court. The lawsuit win ended school segregation in Texas. But Marshall and Durham had a bigger vision. They, and many other Americans wanted complete school desegregation throughout America, in all fifty states, plus its territories and protectorates

That case, which was the product of several other desegregation cases, would eventually become known as Brown v Board of Education, and they won that one too, also in the U.S. Supreme Court. It affectively ended school segregation in the U.S. by proving that separate education was not always equal education.

The seeds for these monumental landmark decisions began at the dining room table at the Durham family home, which still stands today on Brockett Street in Sherman, just a few blocks from where both Black Business District and County Courthouse once stood.

Photo below shows Thurgood Marshall on the right, with William J. Durham. 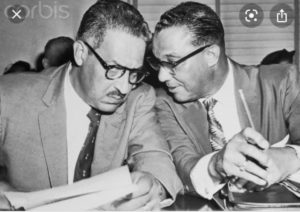 Sherman riot survivor William Durham also won another landmark case against the Galveston ISD, which forced the district to pay minority teachers the same as white teachers.  A huge win for equal pay for equal work. Read more at this link.

The People of Sherman

During and after the riot, mobs of white racists threatened to kill black business owners and their families if they didn’t leave town immediately.  Both black and white Sherman residents helped and hid their threatened black neighbors and business associates. Outstanding acts of bravery and kindness were demonstrated around the city and county. Salem Sofey, the Syrian-American grocer who faced down the mob, and saved black owned homes from being burned down.

One hero was grocer Salem Sofey who had moved to Sherman from Syria in 1888. His grocery store was at the corner of North Branch & Brockett Streets.

When the white mob walked down the street to burn down homes of black families, Sofey approached the mob and stood them down, saying that he owned all the houses and that he was landlord of the neighborhood. The mob bought the story and moved on. 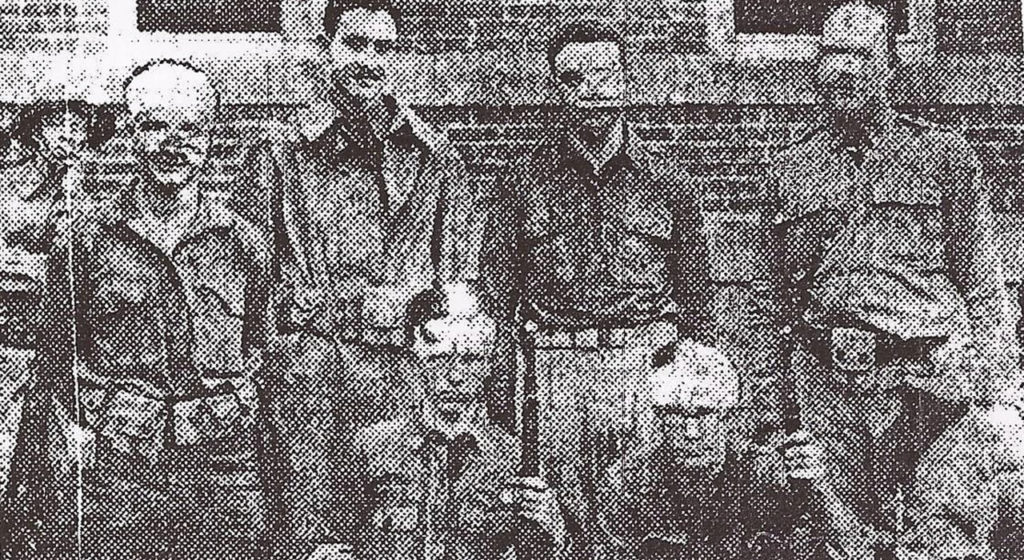 Beat up Texas National Guardsmen, after the street fighting, won the day.

When the news of the severity of the riot reached the Texas Governor Dan Moody, Jr., he declared MARTIAL LAW, and sent in the Texas National Guard to quell the Sherman rioters.  When the TNG arrived, they found a wild melee of street fighting and buildings burning.

Many guardsmen directly confronted the race rioters and several fights ensued. Photos of the soldiers were later published that showed them bloodied and bandaged, but still standing proud and smiling at their units success in stopping the riot. 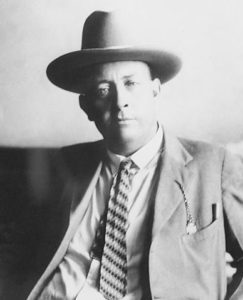 Along with two other Rangers, a police sergeant, the County Sheriff and his deputies, the law enforcement officers did their best to hold the mob at bay, protect George Hughes and save the Grayson County Courthouse.

As an old school Texas lawman, Hamer had a controversial past by his willingness to use extrajudicial killing. When he confronted fellow Texans Clyde Barrow and Bonnie Parker, Hamer did not wait for the Barrow gang to unsheathe their M1918 Browning Automatic Rifles.

But Hamer also was no friend to the KKK of which he declared war on in 1922. Hamer is reported to have saved 15 black Texans from lynch mobs during his tenure as a lawman.